These shelters are located in the upper part of an impressive rocky peak. La Choca canyon, tributary of the River Vero, flows by its base.

From Barfaluy you can make out the “Tozal de Mallata”, which is also the location of the confluence of the Basender, La Choca and Vero canyons.

The area includes the shelters of Barfaluy I, Barfaluy 2 and Barfaluy 3, all of which have schematic art. The red paintings dominate, with the colour obtained by mixing crushed ochre with water and a binding agent. In the Barfaluy 3 shelter, the figures are black.

There is a guided tour service available.

The shelter has compact dimensions, with a maximum depth of 5m. All of the figures depicted are red and are erratically distributed.

The toes and fingers are exaggeratedly long, resembling claws. A bifurcated sign is above its head. 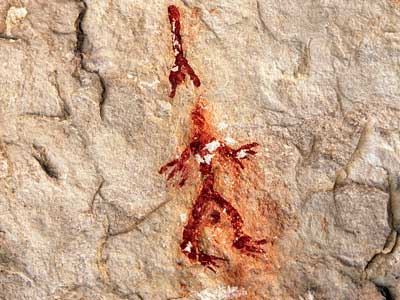 Shown are two almost identical figures with great stylisation in their execution. 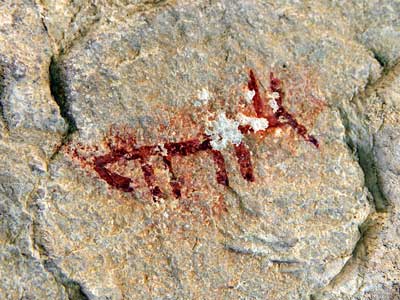 A human figure appears with its fingers and toes out of proportion. It is dragging what could be a sledge with another anthropomorph lying down on it. 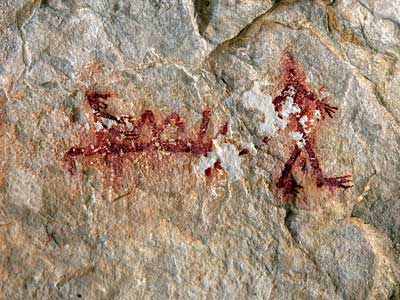 This is a shelter with a maximum depth of 8m and a bit more at the mouth. The figures are depicted in red and are grouped together in the background of the cave.

A large figure (20cm), which could represent a woman with bare breasts. Angular symbols, remnants and marks surround the figure. 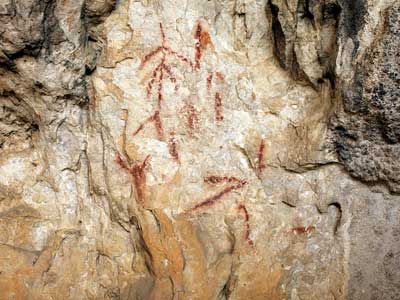 It has a rocky peak, 13m in length and a maximum depth of 4.6m. The cave paintings, semi-erased due to fungi, algae and the climate, are depicted in black.

The scene has six animals, all turned to the left and endowed with enormous antlers. This isn't the only group of caprine however, the other one that exists has been greatly damaged by calcareous filtrations. 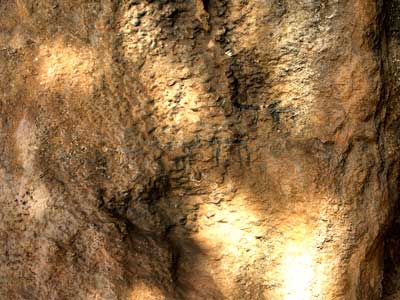