Paleolithic Art is one of the oldest artistic forms of humanity. The art was created by groups of Homo sapiens, hunters and gatherers, who had to deal with a harsh climate during the last ice age (“quaternary glaciation”).

The pictorial representations were usually located deep inside caves, where the darkness accentuated their magical and enigmatic properties.

The depictions are often of different species of animals that have since become extinct, such as types of horses, reindeers and cave bears, among others. Esoteric symbols, negative hand stencils, aligned dots and several lines also appear, which cannot be interpreted. 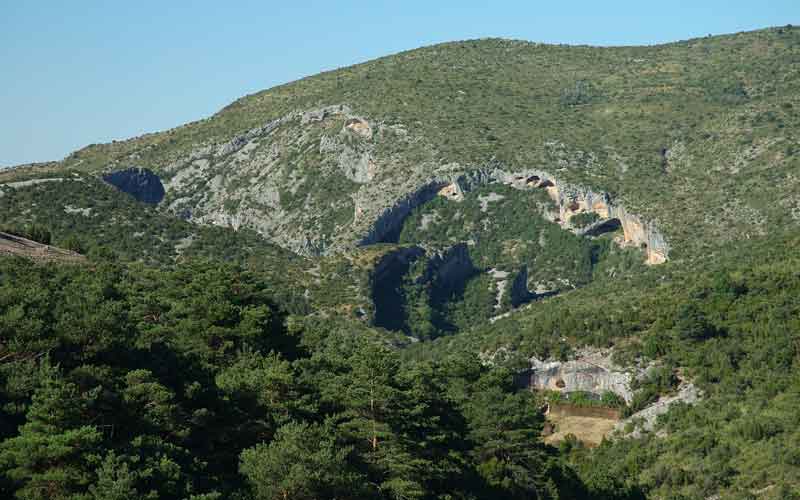 In the Arpán canyon, tributary of the River Vero, is a unique site known in Aragon for its paleolithic cave paintings.

It is a deep shelter, in which only indirect sunlight penetrates. Its opening is orientated towards the east and in front of it is a spring (“fuente”), which gave the cavity its name.

During the paleolithic era, the cave was used as a temporary shelter during the coldest months of the year. Humans gained access to this site after following the movement of wild animals, that they were hunting.

The walls contain paintings from the Upper Paleolithic era (around 22,000 B.C.E), depicted in black and red, cave engravings and remains of what was the settlement on the site. The latest research and dating indicate that the collection is the older than it was previously thought.

Successive excavations have permitted the recovery of several instruments carved from flint and quartzite, as well as the remains of wild animals, such as horses. A fire heater, which has few parallels in the Iberian peninsula, was also found.

Given that currently it isn't possible to visit the interior of the cave, there is a recreation of it in the Cave Art Centre, in Colungo.

There have been 42 negative hand stencils, dating back to 22,500 B.C.E, recorded in the interior of the cave.

Hands of children and adults were outlined through the use of red pigment and black pigment for three of the hands (an exceptional occurrence in the Iberian Peninsula).

The hands shown are incomplete as part of the phalanges in the hands don't appear. In this respect, several theories exist, such as the possible clenching of the hands, ritual mutilations, loss due to frostbite, etc. 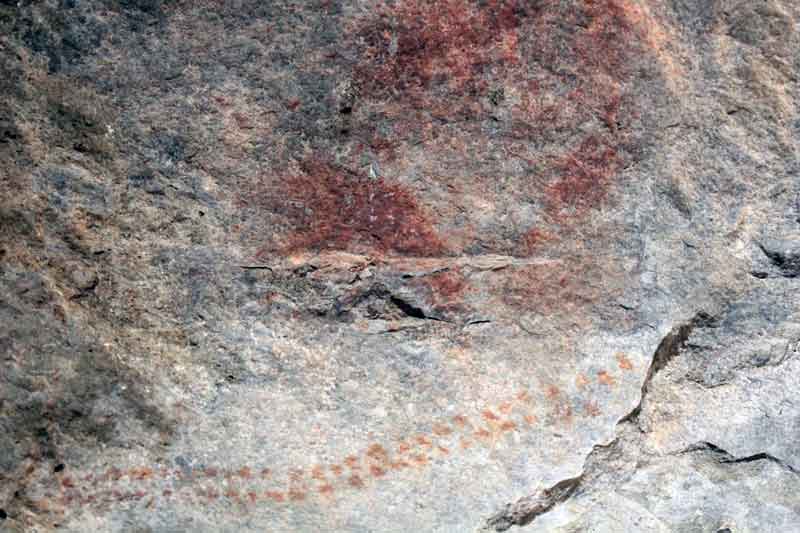 The cave preserves 11 equine representations, although the majority cannot be viewed by the naked eye as they are hidden under a thick layer of soot produced by the smoke from the fire of the shepherds.

The naturalistic representation of the head of the horse contrasts with the impossible to interpret trefoil symbol.

Horses facing each other

On the ceiling of the cave, where the natural light barely reaches, you will find the silhouettes of two horses painted in red. The figure of one of them is complete and appears to be impaled with a spear or javelin. Only the head and the neck of the other horse is visible. 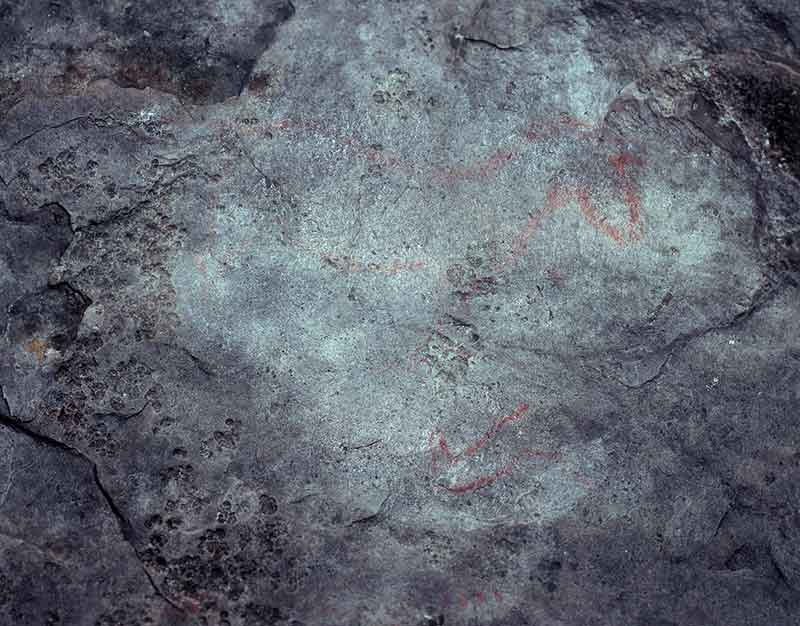 Negative hand stencils are plentiful in the cave. In some cases red pigments are used, as can be seen in the photograph, and in others a charcoal black. 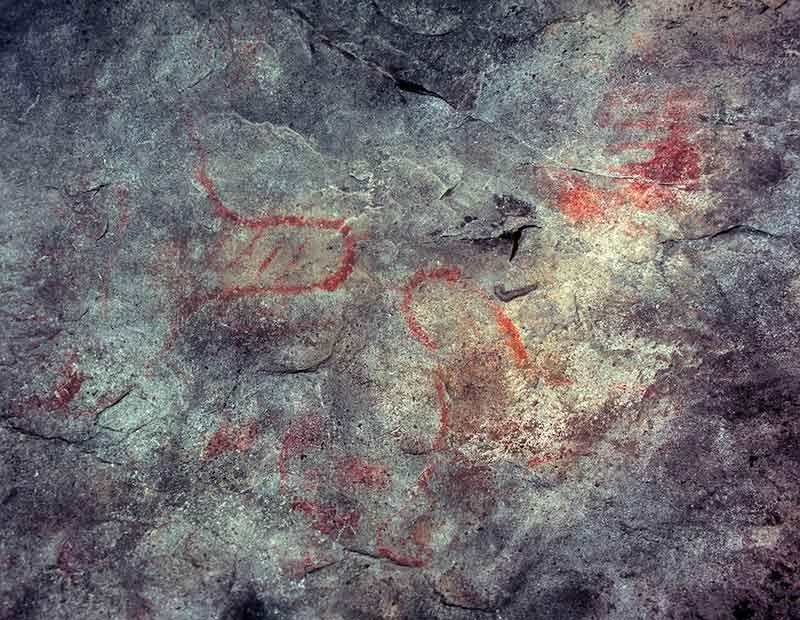 On the ceiling of the cave there are three negative hand stencils with the fingers retracted, which are the only depictions in black.

In addition to the enigmatic hands, in the Fuente del Trucho there are many aligned dots which cross from one side of the ceiling to the other. At times they are in the form of four rows, which are more or less parallel. Their significance is a mystery. 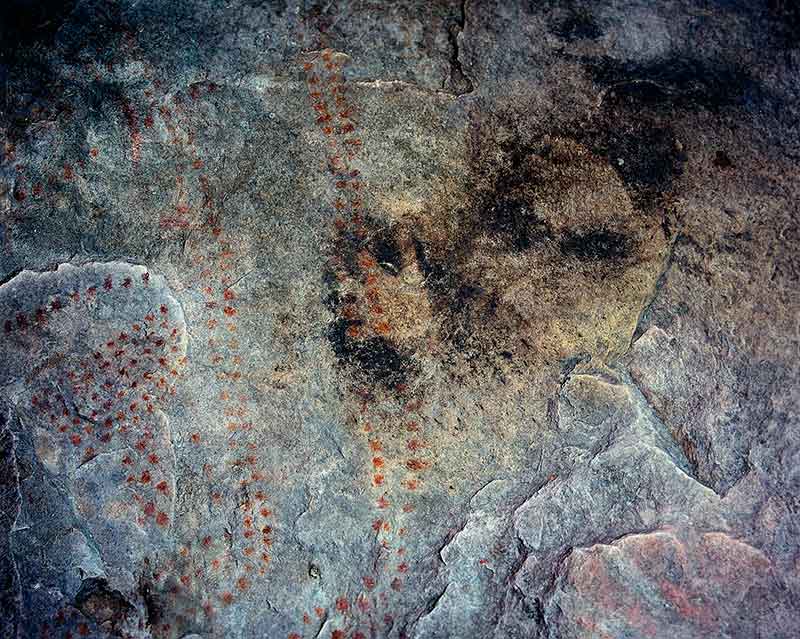 Next to the entrance of the cave, on the left-hand side, you can see several engravings of deep lines made in the rock. Despite some difficulties, several extinct animals have been identified: the head of an equine, the antlered-head of a reindeer, the head of a possible feline, a possible head of a bear and a bear completely hunched over, executed with a jagged technique. 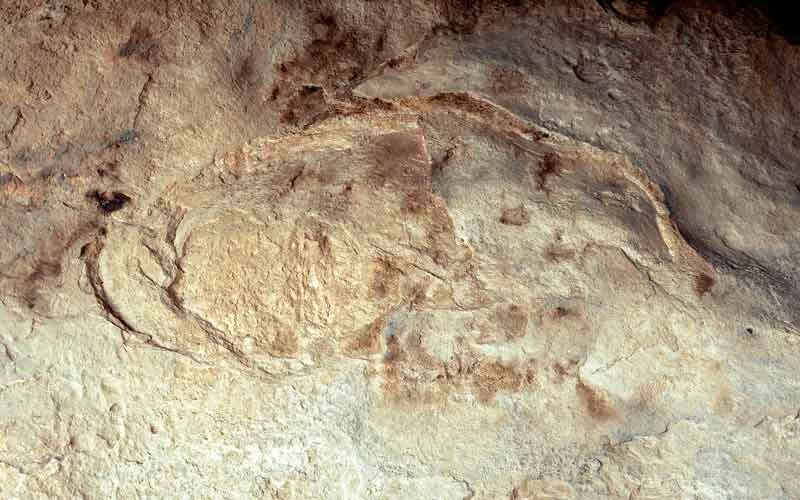